As West Genetics sends their fourth-year Pandoras to reinforce East Genetics, the West Genetics Academy is soon attacked and surrounded by the Nova. With the fourth-years too far to help them, Yumi and Eliza leads the remaining fourth-years and the Military to the front lines while the rest of West Genetics’ Pandoras and Limiters are ordered to guard the Academy. However, the Nova soon release Nova Forms, Pandoras they absorbed earlier at East Genetics who are now infected and under their control. Meanwhile, Satellizer is angry that Kazuya sees her as a replacement for his sister, but before he can explain, both of them, along with Lana, Ganessa and Arthur, are called by Sister Margaret to defend the underground Ravensborne Nucleohede facility which holds the body of Maria Lancelot, the first and mother of Pandoras. As the Nova Forms attack the Academy, a small group of them lead by Cassie and Milena manage to breach into underground facility. 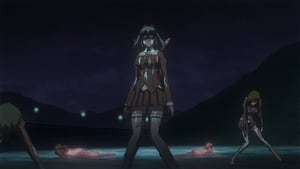